The COVID-19 pandemic has decimated highly vulnerable African economies that were already on a lifeline. Jobs have been lost and incomes have been affected due to the closures. Restrictions on movement and face-to-face interactions have accelerated the pace of digitalization of financial services and the infiltration of some unregulated and unscrupulous financial services operators. In a bid to survive, some vulnerable people got trapped in the network of scam loan apps hosted on Google Play Store.

These predatory loan apps are disguised as platforms where you can access fast loans without any collateral except providing a Bank Verification Number (BVN), authorization request, image, contacts and files on the device. The victims are expected to repay the loans at astronomical interest rates within 3-7 days compared to 91-365 days of claims on Google Play Store. We have found that this violates the Google Play Store policy as updated August 2019.

The policy reads as follows: “We don’t allow apps that promote personal loans that require full repayment in 60 days or less from the date the loan was issued.”

We spoke with Pearl Folasade from Nigeria who was completely frustrated that despite clearing her debt, the loan app she was using called “Kash Kash” did not clear it, hence an accumulation of late repayment debts. She showed a series of threatening messages she had received from the company.

We assessed registration documents from three of these loan applications and documents retrieved from the Corporate Affairs Commission (CAC) in Nigeria showed that the founding directors were Chinese nationals. Although Nigeria does not discriminate against foreign nationals doing business in the country, the business must be legal and have the required license to operate. However, for the volume of financial transactions carried out by these companies, they were not licensed and therefore operated illegally in the country.

We reviewed Kash Kash’s operations and found some red flags. We interviewed a source from Zenith Bank, a commercial bank in Nigeria where Kash Kash hosted its operating account as Super Car Universal Limited, about lending app activities such as exorbitant interest rates they collected from customers and the defamatory messages sent. to contacts of their clients when they have missed their repayment date. After our investigations, the bank conducted an internal investigation and it was discovered that the account holder did not have the required license to operate as a money lender, according to the source who spoke under cover of anonymity. This led to Zenith Bank closing the first account, however, their operations have been moved to another account named Speedy Choice which is still operational and managed by the same people who managed the previous account. We emailed Kash Kash to further explain the interest rate formula, but never received a response. 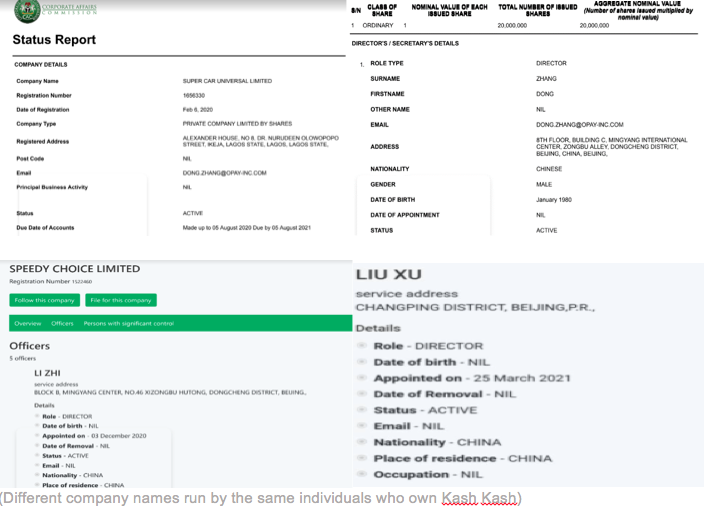 We spoke with a former debt collector who declined to be identified. He said the loan company he worked for, LCredit, had a similar business model to Kash Kash and operated under the company name CAC Cashigo and disbursed loans to customers without collateral and defaulters received threatening messages. . These customers rarely read these policies out of desperation and are unable to meet the payment date. According to him, the loan app (LCredit) tested the idea of ​​sending threatening messages as a way to collect loan repayment and it worked, hence its adoption across the organization. He said he disagreed with the unethical practice of sending such messages to contacts. We contacted one of the people listed as a registrant on the company’s registration document, Kelechi Obi, who declined to comment as he simply emailed back saying, ‘I don’t deal with them anymore since the incorporation of the company. I don’t know where they are.”

Babatunde Irukera, CEO of the Federal Competition and Consumer Protection Commission in Nigeria (FCCPC), said they have taken steps to regulate lending applications. “We have investigated and closed 6 major ones and are now looking for the smaller ones,” he said.

“We are working with the Central Bank of Nigeria and other stakeholders to develop guidelines on how they do business and also guiding them on how to calculate interest and what kind of information they can upload to consumers. Money lenders are an important part of society. We don’t send them back; we are trying to regulate.

In Nigeria, short-term borrowing through registered channels such as microfinance banks is restricted to those who have a regular stream of income, resulting in a wave of loan seekers who patronize these loan sharks in a country.

Lending apps and other fintech products can be used for money laundering and other forms of illicit financial flows (IFF). According to the United Nations Conference on Trade and Development (UNCTAD) Economic Development in Africa Report 2020, Africa loses an estimated $88.6 billion a year in IFFs.

Lending applications like those in Nigeria are prevalent in some other African countries like Kenya, however, the mode of lending in a country like Zimbabwe seems to vary a bit.

One of these operators sends text messages on WhatsApp offering “instant” loans, as shown below.

“We consider the following items: cars, machinery, televisions, refrigerators, freezers and generators as collateral. We have secure parking and storage for assets,” reads one of their advertisements, before promising the best bridge financing offer. Patience Murai, a civil servant from Bulawayo, Zimbabwe’s second capital, used the platform to supplement her income in 2021. Loans offered ranged from ZW$1,000, with an unlimited maximum amount (determined by creditworthiness).

“The loan was a godsend,” she said. Her small side business of selling skin care products to her co-workers no longer brought her extra income because the government offices weren’t that busy. “Repaying the loan was something else, I hadn’t realized that these short-term loans are exorbitant.”

After she missed her original repayment deadline, the lender threatened to confiscate her television, which she had offered as collateral. She had to borrow from a friend to avoid the confiscation of her property.

Patience’s case does not appear to be as common in Zimbabwe as it is in Nigeria, however, and we found that measures have been put in place by the government and regulators to prevent the penetration of these unregulated lending apps. .

Over time, Zimbabwe has seen an increase in non-bank mobile money providers which are largely operated by mobile network operators (MNOs). These include Kashagi, which is owned by Zimbabwe’s largest MNO, Econet Wireless.

Informed by this growth, the government amended the Microfinance Act in 2019 to allow only two categories of microfinance instruments, namely deposits and credit only. The authorities have reinforced the regulation of this sector to curb the emergence of predatory operators. According to Jenfan Muswere, Minister of Information and Communication Technology for Postal and Courier Services, to protect the integrity of the system, mobile money system operators are required to partner with established financial institutions .

He said the Central Bank monitors the cash balances of MNOs and financial institutions in real time.

In 2019, the Reserve Bank of Zimbabwe (RBZ) established the National Fintech Steering Committee to provide strategic policy direction that fosters fintech innovation and entrepreneurship. The committee was also tasked with assessing the “risks, challenges and opportunities arising from the digitization and use of fintech”.

According to Harare-based banker Tawanda Kaminza, “poor regulation of micro-lenders poses a huge risk to the sector. When poorly regulated, the sector faces risks such as the licensing of predatory lenders, including criminals involved in illicit financial flows”.

As of December 2021, 168 credit-only microfinance institutions were registered with the RBZ.

“Initially, MFBs were not allowed to ask for collateral before making loans due to bad debts, but now they are forced to ask for collateral,” she said. “Most of our clients are retirees.” According to Onyishi, loan applications can work closely with MFBs, so that MFBs perform due diligence and credit checks on loan applicants, while applications disburse loans and a credit sharing plan. profits is achieved.

Albert Makochekanwa, a professor and lecturer in the Department of Economics at the University of Zimbabwe, said properly regulated microfinance institutions are crucial.

This report was produced with the kind permission of Wealth of Nations, a media skills development program run by the Thomson Reuters Foundation. More information at www.wealth-of-nations.org. The content is the sole responsibility of the author and publisher.